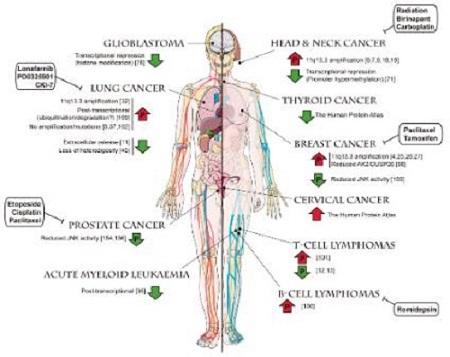 Altered FADD levels are often found in tumor cells. Researchers at Universidad Autónoma de Madrid and Centro de Biología Molecular Severo Ochoa have studied the mechanisms that could explain the reason for this. The study, which was published in Cancers, also describes the clinical implications of FADD alterations in different types of tumors.

Researchers at the Biology Department of Universidad Autónoma de Madrid (UAM) and Centro de Biología Molecular Severo Ochoa (a joint UAM-CSIC center) have studied for the very first time the mechanisms that could be responsible for FADD level alterations in cancer.

The results, which were published in Cancers, include an exhaustive bibliographical review of the scientific literature and the genomic and epigenomic data obtained from thousands of cancer patients. Researchers also address the clinical implications associated with FADD alterations in cancer for diagnosis, prognosis and therapy purposes.

The adaptor protein FADD is produced by the FADD (Fas-associated Death Domain) gene. It plays a pivotal role in a type of genetically programmed cellular death called ‘apoptosis’. More recently, it has also been described as possibly being involved in other functions, such as proliferation, cell cycle control, inflammation, and metabolism.

Altered FADD protein levels are oberved in many types of tumor cells. In some types of cancer, FADD is produced in larger quantities than would normally occur; in other types of cancer lower amounts are produced. This could be explained by the different functions carried out by the protein in the cell; for instance, since FADD is a key element in apoptosis, a reduction of FADD in tumor cells would prevent cell death, which would benefit the tumor.

On the other hand, increased FADD in tumor cells could boost other of its functions, such as proliferation. If that were the case, this mechanism would also benefit the tumor.

Cases of FADD increase and decrease